The borwell team had a part to play in the Farnborough Airshow 2018. A team from the QinetiQ Farnborough site commissioned the borwell team to produce a front-end software display, to provide Situation Awareness to the Flight Safety Team responsible for the Airshow. The QinetiQ team provided a compact tracking RADAR and an optical camera, feeding the track data and video images in real-time across a microwave link to the front-end Airshow Monitor display software. They contribute their know-how and expertise.

Validation is the process where each display is tested against stringent safety conditions and air space constraints. The Town of Farnborough is just to the East of the Airport, Aldershot to the South, Cody Business park and the Golf course are to the North. Above the Airport are several Civil Air Traffic corridors.  Represented as custom polyhedrons, some had height or speed rules. These rules were triggered if aircraft went into, out of, or too fast in these polyhedrons.

Each flying display was recorded in 3D and 4D, with the corresponding video captured too. All the flying displays were captured within a self-contained mission file.  This can be replayed to allow review and adjustments to be made to an individual flying display. 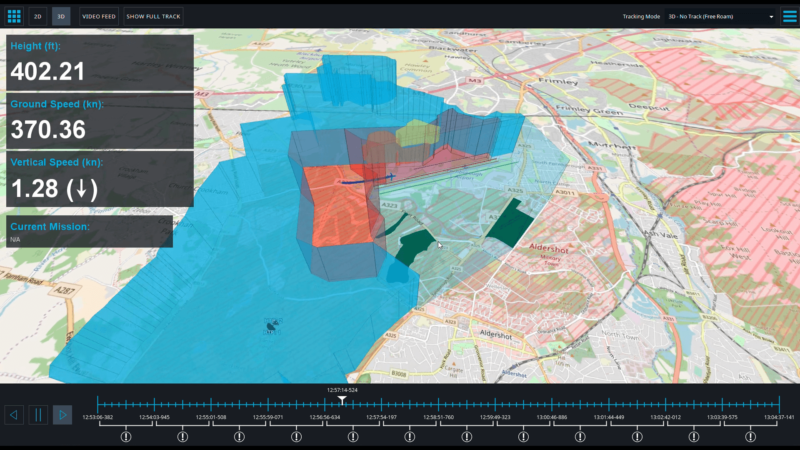 A feature was recorded by Farnborough International News Network.  This was aired on the BBC One Show on Wednesday 18th July.

Steve Borwell-Fox, the MD of borwell said “I am really proud of this project, and proud of our team. Many of our team had a role to play in planning, designing, building, testing and operating this software. Working with QinetiQ has been excellent.”

“We have been brought in as Visualisation experts, and treated with great respect by the QinetiQ Project Manager and their technical team. We were greeted like VIPs at the Farnborough Airshow, and had our passes upgraded to allow us to go ‘Airside’ to see the team operating the software.”

The full feature about the Farnborough Airshow 2018 can be seen on BBC iPlayer.